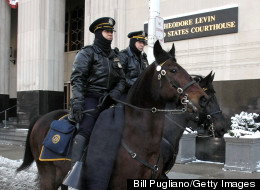 The Detroit Police Department is piloting a new program that may help discourage home invasions through increased police interaction with the community.

The new program, which launches on June 4th in the Grandmont-Rosedale neighborhood, is a partnership between a New York-based think tank called theManhattan Institute and Detroit police.

Police officers and Department of Corrections officers will go on home visits to people on probation and parole, seeking out those they consider to be potential home invaders before they can commit crimes, the Free Press reports.

According to the Manhattan Institute: “During the carrot and stick intervention, the officers will present an offer for a hand up so they can become contributing members of the community while emphasizing the severe and lasting consequences that will result from further criminal acts.”

It’s an update of a strategy police tried in New York City, known as “broken windows” policing. The effort addresses public safety by concentrating on small details to promote feelings of orderliness in a neighborhood.

“The goal is not to have more arrests or have more tickets issued, but instead to have better quality and a larger quantity of citizen-to-police interaction — this means more traffic stops, more enforcement of littering and loitering ordinances,” Michael Alec Reddy, the Manhattan Institute’s director, told CBS Detroit.

Brenda J. Bond, an assistant professor of Public Management at Suffolk University in Boston, linked community policing to significant decreases in crime in areas of Lowell, Mass.Research on the success of “broken windows” strategies has yielded mixed results.

But a study by the Center on Juvenile and Criminal Justice, which compared crime rates in cities where stricter “broken windows” strategies were pursued with San Francisco, where a less stringent policy was enforced, concluded the policy did not make a significant impact.

Detroit’s pilot program will last 90 days and already has 60 Grandmont-Rosedale residents committed, according to the Free Press. The Manhattan Institute is working with DPD for no charge.