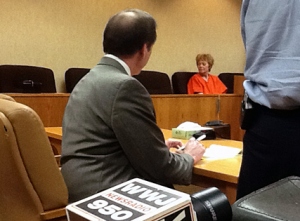 WEST BLOOMFIELD (Talk Radio 1270) A grandmother who allegedly killed her grandson with eight bullets delivered over several minutes acted out of terror, according to her attorney Jerome Sabbota.

Sabbota talked to Charlie Langton on his 1270 Talk Radio morning show about retired teacher Sandra Layne, 74, who is in jail on an open murder charge for killing 17-year-old grandson Jonathan Hoffman. She next appears in court Thursday for a pre-trial hearing.

How is Layne holding up? “Not well, she has tremendous guilt. She realizes she hurt a person she really loved … She wouldn’t abandon him and she wouldn’t give up on him,” Sabbota said.

He added Hoffman tested positive for the synthetic marijuana known as “spice,” the day of the attack, which is also implicated in the Cipriano family killing in nearby Farmington Hills, which is unfolding today in court. Tucker Cipriano and his pal Mitchell Young are charged with killing Cipriano’s father Bob Cipriano, and severely injuring his brother and mother during a drug-fueled baseball bat attack in March.

Reports have indicated Layne was fearful after the attack, and bought a gun.

“Everybody’s afraid as a result of Cipriano because anything can happen in anybody’s house,” Sabbota said. “Most people don’t understand what fear is until (they experience something like this).”

He added that Layne bought the gun after a March incident where neighbors called police on her grandson during a screaming match that seemed to be out of control. Hoffman was on probation after drug-related run-ins with the law and attended an alternative high school for troubled kids.

Hoffman was living with his grandmother after his parents, who are divorced, moved to Arizona.

He added his client is more than happy to testify in her own defense.“I don’t want to say abandoned, I can tell you the grandmother was responsible for the day-in care of the child … Grandma supported the child,” Sabbota said.

Many are wondering if Hoffman was out of control why the grandmother didn’t send him back to his parents — instead of buying a gun.

“Grandmothers
don’t like to give up on grandchildren, mothers and fathers give up, but not grandmothers,” Sabbota said.

Can you use lethal force if you’re afraid in your own home? “You have to have an honest and reasonable belief that you’re going to suffer … You look at it from the eye of the beholder … It’s from that person’s perspective,” Sabbota said.

The grandmother is definitely legally competent, he added.

Earlier he said: “The actual scenario indicates plenty of reason why a 74-year-old individual might be afraid of an out- of-control grandson.”