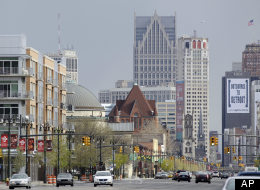 Tackling the public safety problems of Detroit requires more than the efforts of one person or a small group of people. Stakeholders of the greater downtown Detroit area are discovering it takes a collective buy-in to create a safe place for people to live, work, play and volunteer.

On a bright Sunday last April, a group of local residents, volunteers and all-around do-gooders gathered on the northern edge of Woodbridge to board up a burned-out duplex. The crumbling hulk on Commonwealth sat abandoned and wide open for months after it caught fire last year. Its roof, gone. The windows, blown out. Whatever charred remains were left inside quickly became a constant target for scrappers and a danger for the children who live and play on an otherwise intact and vibrant block filled with both new and longtime residents.

Stephanie Howells, a member of Americorps, headed up the effort to minimize the danger and blight of the burned-out duplex on Commonwealth. She got the dumpsters delivered to the vacant lot next to the problem building, made sure the plywood to board up the windows was cut and painted, and rallied dozens of local residents and volunteers from Teach for America to get the job done. The finished product is a blight now secured and ready for demolition, yards of that fire debris and overgrowth carted away and a neighborhood proud of a job well done.

The Earth Day board up of the burned out duplex on Commonwealth is just one aspect of a comprehensive strategy to lower crime and raise the quality of life in Detroit’s greater downtown area. The strategy includes Americorps Urban Safetyprogram, the Central Business District’s Project Lighthouse and Wayne State University Police Department’s CompStat initiative with other public safety agencies.

The results have been years in the making and are statistically quantifiable. Wayne State Police Department shows double-digit decreases in crime in the Midtown, New Center, Woodbridge and Henry Ford Hospital areas since 2009. Major crimes down 38 percent. Robberies and burglaries decreased 30 percent each. Larcenies dropped 37 percent and auto theft plunged 53 percent. There is also no evidence of displacement of crime to adjacent areas, which also saw a drop in crime.

Wayne State University Police Chief Anthony Holt says the real proof is in the responses he hears from residents and businesses. If they are telling him that their quality of life is improved because of the work of local public safety workers, then he knows his tactics are having an impact. To him that means anything from a general feeling of safety to compliments for fast response times.

“If the response time is more than five minutes then they (responding officers and supervisors) need to call me and explain why,” Holt says. “My radio is always on.”

Holt got his start as a police officer at the Wayne State Police Department 35 years ago. He likes to say he has held every job in the department since his promotion to police chief five years ago. Not long after that he organized a biweekly CompStat meeting, short for Computer or Comparative Statistics, for local public safety agencies, including his department, Michigan State Police, Wayne County Sheriff’s Department, Detroit Police Department and the security forces for Detroit Medical Center and Henry Ford Hospital, among other organizations.

“I thought there has to be a better way to do this,” Holt says. “So I met with the Center for Urban Studies and our neighbors and create a Wayne State CompStat. Then we really started to think outside of the box.”

That includes the normal staples of CompStat policing, such as data-driven responses to crime spots, including tactical deployment of uniform and undercover officers to conduct proactive policing such as enforcement of traffic and loitering laws. Officers also worked with the state Department of Corrections to conduct home checks of parolees and monthly absconder sweeps. Holt points out that a large percentage of criminals are repeat offenders.

Officers also employ the broken-windows theory to their policing, clamping down on quality of life issues such as aggressive panhandling. They work with local mental health professionals to help motivate the vagrants to get help instead of begging for a hand out.

The importance of strategy when providing public safety is almost important as how first responder resources are deployed. It is with this in mind that the Detroit Police Department partnered with a number of downtown businesses to create Project Lighthouse this spring.

Project Lighthouse is sort of a neighborhood watch for Detroit’s Central Business District. It has attracted 30 businesses to provide a help desk for local residents or visitors in need of help safe refuge and resources. For instance, if a motorists is locked out of their vehicle after business hours, they can go to a Project Lighthouse location to get help in a timely fashion. The idea is to help keep cases like this out of the 911 system so police officers can focus on police works. The first locations will be established in well-known places, such as the Fox Theatre, the Renaissance Center and Chrysler House.

“Hopefully, this is a model we can replicate across the city with respect to forming these relationships,” Detroit Police Chief Ralph Godbee says.

Godbee adds that its buy-in from local stakeholders that makes neighborhood watches effective. It empowers the local residents and business owners to take ownership of their community, which in turn plays a critical roll in keeping law breakers at bay.

That is done through things like organizing dangerous building board ups, offering safety assessments and improvements to at-risk homes and improving public spaces. One of the initiative’s projects include putting fliers on every car in Woodbridge. Those fliers include information about upcoming neighborhood clean-ups, crime-prevention tips and connecting unemployed residents with educational resources and job opportunities.

The bottom line is not only improved public safety but a higher quality of life. It all comes at the price of getting local residents to buy into the plan and take ownership of it.

“You have to have buy-in whenever you do it,” Holt says. “This is the same thing New York did with the broken windows theory.”