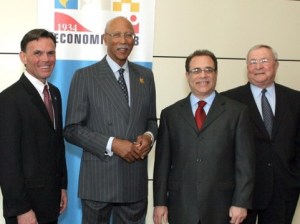 “We, every day, see that some heinous crimes are perpetrated  and it’s just hard to relate with some of the things that are going on right now,” Bing said, talking at “Pancakes & Politics” at the Townsend Hotel in Birmingham.

“But we spend an awful lot of time with our police chief and other public safety officials to see what we can do to curb this violence and try to get people feeling good about the city — and safety is number one,” he said.

Taking questions from the audience, Bing was asked if he’d be willing to allow law enforcement from neighboring counties to enter the city to respond to calls if they could get there quicker than Detroit police.

Bing said he’s been talking with Gov. Rick Snyder about training State Police to work within the city.“… I’m not a law enforcement specialist, if you will. That’s something that I really leave to our chief of police,” said Bing. “But, as a citizen, I do believe that the response time is very, very important. And, if in fact, that we can work out a situation where we are communicating and utilizing all of the resources that we can for the benefit of our citizens, I am personally in favor of that.”

Hackel said Detroit Police Chief Ralph Godbee is already working with law enforcement agencies in the suburbs to deal with computer crimes and drug-related issues.  ”So, we do cross jurisdictional boundaries to help with each other within some of those specialized units,” Hackel said, adding that working out whether an outside officer would have the authority to issue violations outside their jurisdiction is a much more complicated issue.

Also up for discussion Friday was the recent turmoil within Wayne County government. (More on this, here).

Once again, Ficano said no way.

“I’ve been a public official for 30 years … I, you know, was able to do everything right for 29. Suddenly for 6 months there’s a difficulty and then you’re going to be defined for those 6 months versus, you know, the other 29 years that you did and all the positive things that have happened,” he said.