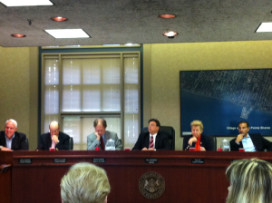 Grosse Pointe Shores residents will be asked in August to vote about whether they would like their city to secede from Wayne County. Their decision will guide the city council as to whethera committee devoted to studying a move to Macomb County should continue to pursue the idea.

Schulte said the study has shown that the move would save residents money and potentially improve county services. The estimated savings is about 4 mills, which currently equals about $1.2 million for the city. The savings for a resident owning a home valued at $100,000 would be about $440 annually, Schulte said. For a $1 million home, the savings would be about $4,400 annually, he said.

Councilmen Alexander Ajlouni and Bruce Bisballe questioned why Wayne County residents would ever agree to let the Shores secede considering it is wealthiest city within Wayne County and the largest source of revenue.

Schulte was not dissuaded by their thoughts but said historically when a city has wanted to leave one county to join another, voters have allowed it to happen. Bisballe said he does not believe such a request to Wayne County voters has a chance.

Other council members began questioning what Wayne County voters would be told to persuade them to let the Shores go and whether Macomb County would come through on their promises as outlined thus far in the study. Schulte said he did not believe such a move would require a campaign but councilman Robert Gesell disagreed, saying he believes something of this magnitude would require a hefty campaign including television commercials.

“Sometimes you can cause more harm by trying to oversell something,” Schulte said.

Schulte wanted to put it before Wayne County residents for a vote but other council members felt it was more appropriate to find out what the majority of Shores residents want first.

Councilwoman Kay Felt said before such a decision is put before the entire county, she wants to know what how everyone in the city feels about making such a move. Gesell echoed her thoughts.

Schools were a major factor in even establishing the Move to Macomb Committee, when the former council asked the city’s attorney, Mark McInerney, to check into whether such a move would change the status being within the Grosse Pointe Public School System.

The answer, shared months ago and repeated tonight, is the district would not change so for those students who currently attend Grosse Pointe Public Schools, they would continue doing so even after the city joined Macomb County.

McInerney, who also represents the school district, said for a district to even consider redrawing its boundaries would be a lengthy, laborious process. Residents of the Shores who would still live within the district would also be allowed to vote on school related issues, he said, despite living in a different county.

Resident Gloria Anton, who is on the study committee, addressed the council and said her work showed the Shores contributes $10 million in revenue to Wayne County but county officials cannot provide information about what services they provide in return.

Anton also questioned why any Shores resident would oppose such a move, explaining saving money is appealing to everyone.

Immediately behind her, however, was resident Jim Jacobs, who spoke against it. Although it has been stated now that Grosse Pointe Public School district lines would not be redrawn, Jacobs believes it is not out of the realm of possibilities once the Shores would officially be part of Macomb. That is not a risk he’s willing to take, he explained.

The chatter among those attending the meeting Tuesday competed with the council’s discussion, to the point that Mayor Ted Kedzierski had to use his gavel a few times to quite the crowd. Other attendees also asked some to quiet down.

Kedzierski began trying to table the topic until the next meeting but Schulte then said he did not want to leave the meeting without a motion to get it on a ballot for voters.

Then discussion morphed into how such a move could be accomplished without the vote of all of Wayne County. Bisballe suggested that the committee approach lawmakers and state legal officials about getting the law changed to reflect a choice of a city’s residents when the city straddles county lines.

There are very few cities within the state that straddle two county lines as the Shores does, which worked in their favor when attempting to keep their municipal court/judge, Bisballe said, explaining it could be used to address this unique situation as well.

Ultimately, the council voted unanimously to put an “advisory vote” on the August primary ballot for Grosse Pointe Shores residents only to say whether they are interested in leaving Wayne County and joining Macomb County.

They also approved a motion by Bisballe to have the study committee host at least two public meetings between now and the August primary for the benefit of residents to provide them information so they may be informed voters on the topic. The motion included that representatives from Wayne and Macomb counties will be invited to share their selling points of why Grosse Pointe Shores should be located in their respective county.

The date and times of those meetings are to be posted, according to their approval.

There are a host of additional issues that would need to be considered, including the maintenance and care of the seawall in Lake St. Clair, which is currently handled by Wayne County. Mayor Ted Kedzierski said he would like to know if Macomb County is going to take on that responsibility.

There would also be other, smaller yet time intensive changes residents would have to make, such as altering wills and a host of other personal documents, Bisballe said.