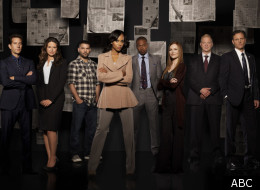 The only thing better than a good scandal is even more “Scandal” — ABC has renewedShonda Rhimes‘ freshman drama series for a second season, which Rhimes announced herself on Twitter.

“Scandal” stars Kerry Washington as Olivia Pope, a high-powered fixer with a resourceful crisis management team behind her (played by Henry Ian Cusick,Darby Stanchfield, Guillermo Diaz, Columbus Short and Katie Lowes), and a complicated relationship with her old boss, the President of the United States (played by Tony Goldwyn).

Season 1 of “Scandal” is just wrapping up its short seven-episode run (season finale airs Thurs., May 17, 10 p.m. ET on ABC), and ratings in the post-“Grey’s Anatomy” timeslot have exceeded expectations

@shondarhimes shonda rhimes
Am super proud to say that @ScandalABC has been picked for a 2nd season!!! Am doing a little dance of joy. Still waiting to hear on PP…

And star Kerry Washington tweeted her thanks to fans

The show has a case-of-the-week element, but also a larger mystery of the first season, which Rhimes has promised will wrap up in the finale, leaving fans with some lingering questions to address in Season 2.

“I felt really strongly when we got our episode order that, instead of going, ‘We’re doing seven [episodes] but are hoping for 13’ — given that I’ll be doing 54 episodes of television this year — we could look at these seven like you would a British miniseries. ‘Let’s ‘State of Play’ this and have a really great seven episodes that’s a complete and total story.’ So, yes, it does have a beginning, middle and an end,” Rhimes said

Her producing partner, Betsy Beers, agreed, but teased that there are still unresolved issues: “But we do leave just enough out there. Nothing is ever fully resolved.”

When asked on Twitter whether Season 2 will be a shortened, British miniseries-style season again (noting that they could accomplish that same movie-every-week feel with, say, 13 episodes), Rhimes responded: “That is always the plan!” No definitive episode order has been announced.

Rhimes’ “Grey’s Anatomy” has already received a ninth season renewal at ABC, with many of the main stars having signed on as well; “Private Practice,” which moved to Tuesdays to make way for “Scandal,” remains on the bubble.