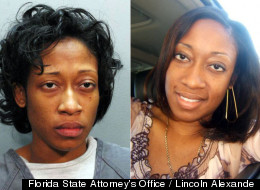 Marissa Alexander, the 31-year-old Florida woman who fired what her family calls a warning shot at her abusive husband, was sentenced Friday morning to 20 years in prison.

Alexander was convicted of three counts of aggravated assault with a deadly weapon for firing into a wall near her husband and his two young children at their Jacksonville home in 2010. Alexander has maintained that she wasn’t trying to hurt anyone and that she was standing her ground against a man who had over the course of nearly a year punched and choked her on several different occasions. Alexander says that she believed she was protected that day under the state’s Stand Your Ground Law, which gives people wide discretion in using deadly force to defend themselves.

A judge and a jury disagreed.

The State Attorney’s Office offered a plea bargain that would have sent Alexander to prison for three years, but she rejected it, hoping to convince a jury that she had been defending herself when she fired the weapon.

Alexander’s case has become the latest battleground in a fight against what Alexander’s supporters call the misapplication of the Stand Your Ground Law and Florida’s mandatory minimum sentencing laws, which offer stiff sentences for crimes involving guns.

Alexander, who did not have a criminal record before the shooting, was convicted of felony assault with a gun.