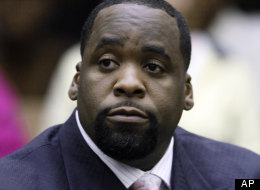 The Securities and Exchange Commission says Kilpatrick and ex-city treasurer Jeffrey Beasley received $125,000 in private jet travel and other perks from an investment firm. The SEC says that was in exchange for getting the city’s pension fund to make an investment favoring the firm.

“I truly believe that all of the entities involved in these `so-called’ investigations know that I have done absolutely nothing wrong,” Kilpatrick said in a Facebook message to The Associated Press.

Kilpatrick and Beasley were among the trustees in 2006 and 2007. The SEC says the two should have told the other trustees that they received perks from the investment firm.

The SEC also accused the investment firm and its CEO, Chauncey Mayfield, of taking part in the influence-peddling scheme in violation of federal securities laws. It said the firm received millions of dollars in management fees from the pension funds’ decision to invest.

Beasley was indicted in January on federal criminal charges of extortion, attempted extortion and conspiracy related to investments by the city employee pension funds.Kilpatrick and his father are accused of taking kickbacks and bribes to steer city business to certain contractors. Their corruption trial is set for September in federal court in Detroit.

In its court filing, the SEC said Kilpatrick, Beasley, Mayfield and the firm engaged in “brazen influence-peddling and betrayal of the public trust.”

The agency said Kilpatrick and Beasley “secretly solicited and received lavish gifts” from Mayfield and his firm, including a trip by private jet to Las Vegas with luxury hotel accommodations, concerts and rounds of golf.

The SEC is seeking unspecified fines and restitution from the four defendants, and an injunction barring Kilpatrick and Beasley from participating in any decisions involving investments by public pensions