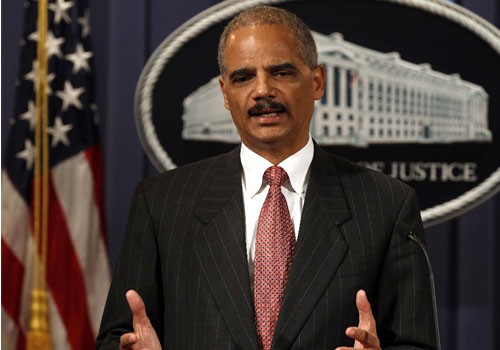 The Detroit Branch NAACP has announced that U.S. Attorney General Eric Holder, the first African American in that position, will serve as the keynote speaker at this year’s dinner on May 6.

The dinner will be preceded by a weekend of activities on May 5 that will highlight the challenges and violent deaths of so many young African Americans and Latinos that have caused people  to stop, take notice and consider plans of action for systemic correction.

“There is absolutely too much violence in our communities, whether it be Aiyana Jones, Bianca Jones, Delrick Miller, Abreeya Brown, Ashley Conaway of Detroit, or, of course, Trayvon Martin in Florida,” said Detroit NAACP President Wendell Anthony. “As a result of this level of violence in all of our communities, we are compelled to come up with strategies and solutions to save life,  not to stand by and witness others in the taking of life.”

On May 5, the Thurgood Marshall Social Justice Advocacy Project of the Detroit Branch NAACP will present a special national forum, “Stops, Cops, and America’s Addiction to Incarceration.”  It will be held at Cobo Convention Center from 10 to 1 p.m. They are pleased to have as partners the Office of the US Attorney for the Eastern District headed by Barbara McQuade, Wayne County Circuit Court Judge Edward Ewell, the Detroit Police Department, Michigan State Police, Detroit Public Schools, NAACP Youth Council, Real Times Media and a host of others. Part 1 will focus on the topics of Know Your Rights, Traffic Stops, Street Stops, and Domestic Disputes.

“As you know, law enforcement and the reaction to it is, of course, a two-way street. Part 2 of the forum will present a national panel discussion on America’s addiction to incarceration. We will focus on why America has the world’s highest incarceration rate and our own state of Michigan has the highest rate in the United States,” Anthony said. “One must also measure this with the knowledge that Michigan is among the lowest states in the funding of public education. We invite middle and high school students from the Detroit metropolitan area of all races to attend. It is free and, of course, open to everyone.”

“For 100 years, the Detroit Branch NAACP has fought for voting rights, jobs, economic access and excellent education. We have made tremendous progress, yet we are also challenged by those who seem to be more focused on limiting our democracy, as opposed to expanding it,” Anthony said. “The new Emergency Manager Law, the imposition of the consent agreements upon communities of color around our state based on their so-called ‘financial distress,’ the manipulation of congressional districts to determine the character of who shall be our elected representatives, weighs heavily upon people of color and of conscience throughout our state.  Among the many reasons that the Declaration of Independence was adopted on July 4, 1776 had to do with the lack of consent of the people to no taxation without representation, as imposed by King George III of Great Britain.”

Anthony continued, “Taking our revenue without returning it to us, as promised ($226 million). These factors demand  that we call to action all of our resources to challenge these attacks. Michigan must not become the new Mississippi. We have come too far to turn back now. We stand upon the foundation of all of those freedom fighters, from Frederick Douglass to Viola Liuzzo, who have helped actualize the dream of Martin Luther King, Jr.”

Anthony called Holder’s choice as speaker a “a fitting tribute to a long string of firsts for the African-American community and the Detroit Branch NAACP.”