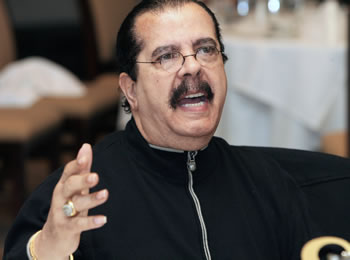 It’s Easter Sunday morning in a city that some say resembles a European war-torn city of World War II. Abandoned houses and buildings are an eyesore in all directions – north, south,east, and west. But smack dab in the middle of it all, right in the heart of the city is a haven – a beacon of hope – the Historical Little Rock Missionary Baptist Church where Reverend Dr. Charles “Jim” Holley is pastor.

His text for the day, “A Foot Race to the Resurrection,” is not only a testimony of Holley’s belief that the city of Detroit will rise again, but a rousing challenge to the congregation to wake up and respond to the person of Jesus Christ through whom all things are possible. He said, “The miracles Jesus did – turning water into wine, raising Lazarus from the dead, giving sight to the blind – if He did it then, He can do it again.”

Little Rock offers a wide range of services and an extensive outreach program inspired by Senior Pastor Holley. The church is following his vision for the Kingdom Agenda to edify, employ, and empower the people both spiritually and economically. As a result of Holley’s business acumen, some of the resources as posted on their website include the Little Rock Rehabilitation Center, Considine Little Rock Family Life Center, Country Preacher Foods, and the Detroit Academy of Arts and Science.

Says Holley, “The problem with Detroit is we’ve got a whole lot of dead people downtown and elsewhere…the dead are not necessarily in the cemetery, they’re in the city.” Concerning the children he went on to say, “It takes a whole village to raise a child, but what happens when something is wrong with the village?” He added, “We have a Trayvon Martin in every city…we pray that [God will] hood them not just with cloth, but with [His] Holy Spirit.”

Holley who was honored in 2010 with a Trumpet Award – overcame cancer, a stroke, and recent back surgery – is preaching stronger than ever and is an inspiration to those who see the miracle in his own life. On the story of Jesus’ resurrection he says, “The [tomb] stone was not rolled away for Jesus to get out, but rather for the disciples to get in. Look to Jesus…run to the resurrection,” he tells the congregation. “The stone has been removed and the barriers and problems in your lives are nothing when compared to what Jesus had to overcome.” At fever pitch he declares, “The stone has been removed…the rest is up to you…[then repeats several times] you ain’t got no excuse!!”

Please visit the churches website at www.historicallittlerockbc.org for more information.