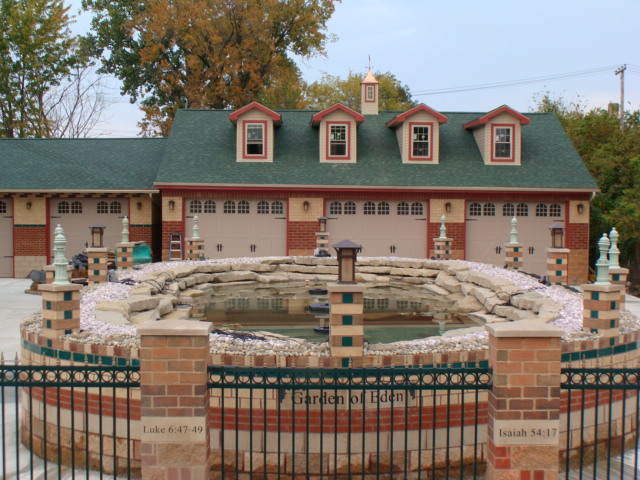 As you approach “Waveney and Lakewood”, something very strange appears. Not just new construction, but what seems to be very out of place or better yet, an oasis in the desert.

The homeowner and builder Pastor Charles Brooks says he is building Detroit back to its former glory, starting with his home on his block “one brick at a time.” Pastor Brooks has lived in this home for nearly 15 years, and does not plan on moving.

Several years ago, Pastor Brooks was a hard working young man with a simple mission on his mind: spreading the gospel in his small church, growing his business and raising his children.

One tragic day, he was riding in the car with his youngest son when he was the victim of a car jacking and suffered a near fatal shooting. Shortly afterwards, he suffered another set back when his home caught fire. Undaunted by what he calls “the devil trying to stop me” he decided what he had to do.

To the astonishment of his neighbors, family and friends he began building his home all over again, dedicating each brick to the glory of God. Each area has significant scriptures etched into them, even street signs in the yard directing you to heavenly bliss.

The home, located at 4234 Lakewood, boasts two garage buildings, one holding a 12 car capacity, the other an eight car capacity, fully finished with an upstairs and lovely tiled bathrooms.

The fountain in the courtyard holds 50,000 gallons of water and is decorated with night lighting and lily pads. The home has three bedrooms, two bathrooms and the grounds are fenced in with security guards on the premises.

The home has been featured on several local and national television shows, and this past summer it was featured in On Earth magazine. Pastor Brooks insists that he was inspired by a divine direction from God to build in this neighborhood and in this nature. I asked several of his aunts, cousins and a sister in attendance at the party what they thought of his venture…No one seemed surprised at the building, saying he has always been driven by his conviction to his religious beliefs. Pastor Brooks celebrated his birthday this weekend and provided each guest with a photo op while entering, upbeat appropriate music, lighted secure and guard staffed parking and a delicious meal.

Pastor Brooks had a host of guests who came to celebrate not only his birthday, but also to view this monument to a God-driven man and show their love and support. When the pastor is not busy beautifying Detroit, he is doing what his heart loves: spreading the gospel. He has held a prayer vigil outside the City County Building, organized and attended many rallies around the city and has plans on another church…”Cant wait to see how it looks.”

Pastor Brooks may live like a king at home, but day-to-day he works in the vineyard just as any other man. He owns and operates be a very skilled and successful home improvement company “Unique Construction,” and if what his home looks like and the words on one of his many trucks is true… Detroit could definitely take a lesson from this man.

The home is not merely a home for Pastor Brooks; it is also the office headquarters for his company, which is quite evident with its many trucks and construction equipment taking its place in several of the many garages and on the grounds.

Editor’s Note: Arvis Perry is a retired school teacher, poet and frequent contributor to the Michigan Chronicle Newspaper. To reach Pastor Brooks call 313.823.2011 or at: info@uniqueconstructionco.com