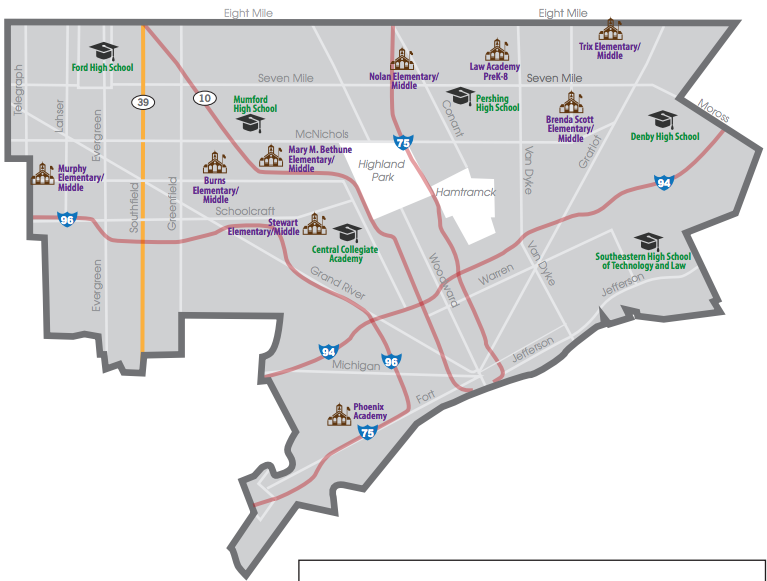 At a special joint meeting Tuesday, the Education
Achievement Authority (EAA) of Michigan Board of Directors and
Executive Committee approved the assignment of 15 Detroit Public
Schools as its initial member schools to open in September.

Chancellor John Covington describes the EAA of Michigan as, “A
different system for a different outcome.  It is our goal to create a
new model for education within the state of Michigan.”

“The existing educational structure in this country was
designed to accommodate an agrarian society 150 years ago,” Covington
said.  “The old model simply does not fit a 21st Century digital
society.  The EAA is a new model for students, teachers and parents to
fit a new century.  We are fundamentally changing the paradigm for
teaching and learning in Michigan.”

The EAA of Michigan is a new statewide system of schools
starting in Detroit that will assume operation of the lowest 5 percent
of the Persistently Lowest Achieving (PLA) schools as defined by the
Michigan Department of Education in the state of Michigan over the
next three years.

The concept for the EAA of Michigan was announced in June, 2011 by
Gov. Rick Snyder and Detroit Public Schools (DPS) Emergency Manager
Roy Roberts.  It was formally created in August, 2011 through an
inter-local agreement between Eastern Michigan University (EMU) and
DPS.  The EAA of Michigan has an 11-member board with seven members
appointed by Snyder, two by DPS and two by EMU.

Covington said the nine elementary and six high schools assigned to
the EAA will be radically transformed to address stifled student
achievement in these schools.

“For the first time, students in direct run schools will be organized
by their instructional level rather than by the number of years they
have been in school,” Covington said.  “They will progress based on
their individual mastery of subjects rather than the number of days
spent in the classroom.

“EAA of Michigan will take low performing schools and build a
portfolio of high performing schools. These schools will feature a
flexible schedule; a rigorous curriculum aligned to state, national
and international standards and increased school-site autonomy to make
decisions necessary for students to succeed.  We are designing a new
approach to education from the ground up.”

The nine elementary/middle schools that will be part of EAA are:

The six high schools are:

Covington said students who currently attend schools that
have been assigned to the EAA of Michigan will automatically become a
part of the new school system.  Families will have the choice to
transfer to a different school if they so desire and have complete
information on the options available to them.  Students from other
schools may also enroll in EAA schools if they desire to be a part of
the new education model.

A full schedule of meetings is planned to assure that
parents are fully informed about all the options available for their
children. Parents will receive a special package in the mail in a few
days with meeting dates and times. In addition, parents can call the
EAA Parent Information line at (313) 456-2278 or visit

for more information.  Covington said parents
will have a voice in the future of their child’s school, including
participation on School Reinvention Teams (SRTs) where they can
provide direct feedback and guidance.  Open enrollment will take place
March 15-April 16, 2012.

“Students will be free to apply to the school of their
choice during open enrollment,” Covington said. “The goal is to
increase high quality options for students so that they can find the
best fit for them.”

Within EAA direct run schools, as students master subject matter
at one level, they will advance to the next level of learning
regardless of the number of days they have spent in the class.  Thus,
advancement is based on their mastery of materials, not the number of
days they have spent in class.  Students who require extra time to
complete materials will not have to start over at the beginning of a
new school year but will be able to work from their prior achievement
levels.

“The EAA of Michigan is designed to empower teachers to
succeed by giving them a professional work environment under which
they will have the autonomy, support and empowerment they need to
dramatically raise student achievement,” Covington said.

·   time to collaborate with others

·   an institutional structure of continuous improvement that supports
teacher growth

Covington said the EAA of Michigan schools will incorporate components
of school transformation efforts being implemented around the country
including in the Chicago Public Schools, in post-Katrina New Orleans
and in Denver, Colorado. He and his staff hosted 12 strategic planning
meetings in communities around the state from December 2011 to
February 2012, to obtain input for envisioning schools of the 21st
Century. More than 700 educators, parents, community leaders, clergy,
business leaders and concerned citizens provided input on how the new
system should operate and functions.  In addition, a statewide
strategic planning student forum hosting 100 students was held in East
Lansing, Michigan on the campus of Michigan State University in
February.