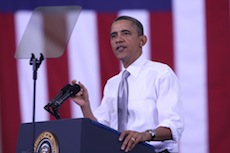 On the one-year anniversary of both the White House Startup America Initiative and the private-sector Startup America Partnership, President Obama sent a Startup America Legislative Agenda to Congress which will expand tax relief and unlock capital for startups and small businesses that are creating jobs.

Additionally, the Department of Homeland Security (DHS) will take steps to attract and retain foreign-born entrepreneurs and highly-skilled immigrants so they can start up the next generation of small businesses and great American companies.

The administration also unveiled several new agency actions to accelerate the growth of young, job-creating companies, at the same time that new entrepreneur-led regional coalitions are launching throughout the nation.

“One year ago today, I called for an all hands on deck effort to ensure that America remains the best place on Earth to turn a great idea into a successful business.  The private sector responded, with the Startup America Partnership launching new entrepreneurial networks all across the country.  Today, we’re taking new steps that build on that progress, and I urge Congress to send me a common-sense bipartisan bill that does even more to expand access to capital and cut taxes for America’s entrepreneurs and small businesses,” said President Obama.

In last week’s State of the Union, the President said, “Most new jobs are created in startups and small businesses.  So let’s pass an agenda that helps them succeed.  Both parties agree on these ideas.  So put them in a bill, and get it on my desk this year.”

Building on this statement and proposals put forward in the Jobs Act in September, today the President delivered an agenda that outlines bipartisan ideas to help startups and small businesses succeed.

Cutting taxes for small businesses:  The president is proposing to build on the 17 small business tax cuts he has already signed into law with four new tax cuts to encourage growth and investment:

Expand and Make Permanent Zero Capital Gains on Small Business Investments: The President is proposing to make permanent a tax cut he put forward and signed into law in 2010 that eliminates taxes on capital gains in key investments in small businesses.

Reward Job Creation with a New Jobs and Wages Tax Credit:  The president is proposing a new tax credit for 2012 that would provide a 10 percent income tax credit on new payroll for small businesses — through either hiring or increased wages — added in 2012.